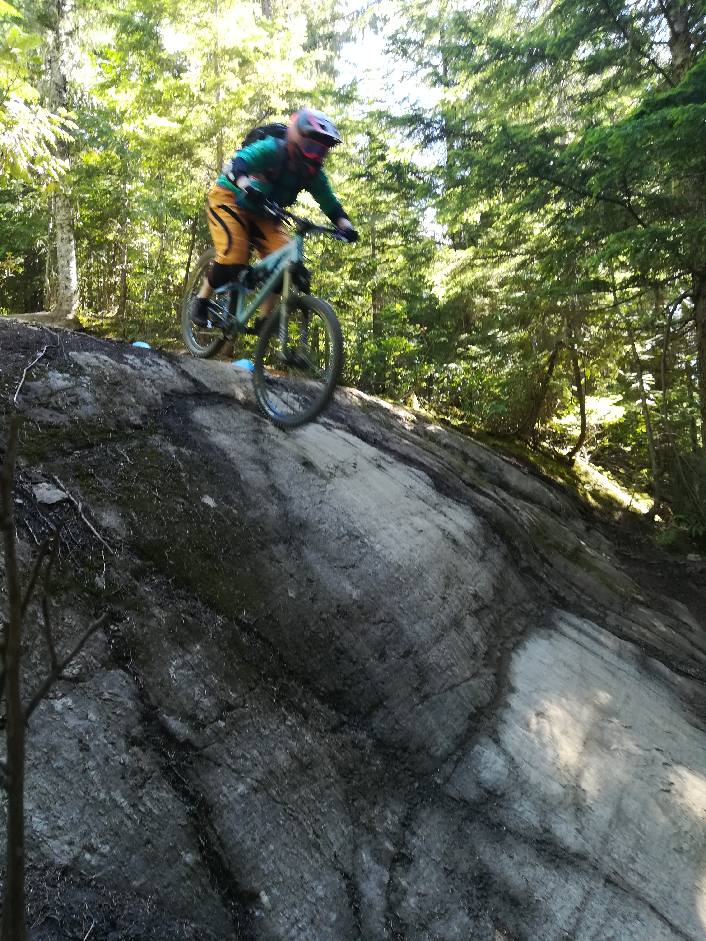 Day 17/45 was an extra special day for me. I had planned a day by myself in Whistler, but while I was booking my lift pass, I came across the GT Bikes sponsored Women's Camp that they run at the bike park. I was immediately sold. A camp for female riders, run by female coaches! What's not to love?

I do love riding with my male riding buddies but I have noticed a difference in approach between them and female friends and sometimes you just need someone to explain something a certain way for it to work for you. That being said, upon arrival and sorting into skill groups there were more "intermediates" than expected and we had a sheepish person come up and ask us if we minded terribly having a male coach that day. Of course it was fine but it was really lovely that they asked. I'm so happy we got the instructor that we did. He was AMAZING. He explained things so clearly and was really great with feedback and pointers.

The real excitement came from the new skills I learned. After some basic skills progression we headed down to do some actual jumping! My friends…. I got off the ground! It was scary but felt SO good. A lovely follower on Facebook messaged me a while ago about my skill progression and she said when she was starting she was told that "bikes were made to fly" and that when she first jumped she knew what that meant. I have to say I was completely shocked when I left the ground and didn't immediately fling out of control or spontaneously explode! While the jumps are still small, I did almost clear a couple of them which is very exciting.

There was one other victory and that was a big, scary rock rolldown. Our coach showed us what to do but said we didn't have to give it a go if we didn't want to but I knew that I'd be mad at myself if I didn't at least try. After one wind up and chicken out, I walked back up and came back to it and did it! Thanks to our lovely coach for snapping the amazing picture of me accomplishing this. I also had my GoPro on that day and captured some of these moments.

When the day of riding was over, we all headed in for some snacks, drinks, and prizes. GT Bikes was there with some great swag as well as some stuff for raffle. Grand prize was this beautiful GT Bikes racing jersey and I was completely shocked and delighted to have actually won it! I've worn it since and it's amazing. My whole torso is like a giant vent with a lovely breeze rippling through.

The day in Whistler was fantastic and I found myself accomplishing things I didn't think I could. I can't wait to go back!